This is the full text of the speech delivered by Niara van Gaalen at the conclusion of the Federal Climate Action Plan Consultation held 18 August 2016 at Kitchener City Hall. It is reproduced here for Earth Day. 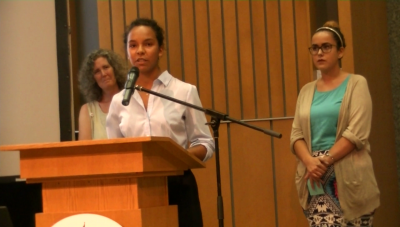 There are many people who are standing on a cliff of deliberate, unconcerned ignorance, when it comes to climate change. When they look into the abyss of the future, they simply want the normal life their parents wanted for them. Unfortunately, with climate change already happening, it will not be possible to live the way our forefathers did. We must be better. And it must happen now.

The Government of Canada needs to lead by example. Everything that is owned by the government, and that they spend our tax dollars on, must from now on contribute to the end of climate change. Institutions, like hospitals, schools, and city halls such as this one, have to help us sequester carbon biologically, to transition to a low carbon economy, to encourage world population reduction, and to restore nature. Our government also has to stop subsidizing, and accepting money from, the large and irresponsible fossil fuel, agro-tech, pharmaceutical, and forestry industries.

There is a list of simple, small things that need to be mandatory and made easily accessible to everybody by law, in order to end climate change: things like rain barrels, recycling, composting, physically separated bike lanes, and excellent, affordable, and punctual public transportation. For every child born in Canada we ought to plant trees in their honour. And we must protect Canada’s great forests, for all time, in our constitution, by restoring what we have damaged, and by embedding in law the protection of 40% of Canada as forest cover. We must also strategically protect at least half of Canada’s 9.985 million square kilometres as pure nature, for all eternity. This is one of the greatest gifts you, as politicians and citizens, could possibly give your children.

There is another list of things — chemicals, substances, and practices, the most important of which being the mining of the tar sands and fracking — that need to be banned. One law, one person’s vote can stop these atrocities that are destroying the earth. It is well understood that these things are important to Canada’s economy now, but is there a price that can be put on the quality of life of your children and grandchildren? Please look at me, and the faces of all the children on earth, in all honesty, and tell us “no.”

It is essential that we move to a low-carbon economy. A carbon tax will help, but it needs to happen nation- and world-wide. We need to tax items that should not be banned, but are still harmful to the environment, such as meat, and we need to ban factory-farming of animals. We also need to change the financial system, and address the problem of tax havens. Many ask how we will pay for the changes needed to stop climate change. This is just one of many examples: by cooperating with countries world-wide, money that hides in places like Delaware, and London, England can be returned to the people to whom it belongs, especially in Third World countries. In a similar way, we need to renegotiate and rethink all treaties and agreements, such as the TTP, NAFTA, space and extra space the Vancouver Declaration.

Biologically capturing and storing carbon is the single best way we can act quickly to prevent some of the worst events that could occur due to climate change. We need to make biochar, and incorporate it into our soil, a huge and damaged carbon sink that can be restored, and can simultaneously offset at least about 20% of global greenhouse gas emissions each year. We need to make more items out of sustainable wood, green our cities, pressure countries that destroy tropical rainforest, and replant and restore the kelp forests on our coasts, to the benefit of both us and the otters. Renewable energy, such as concentrated solar power and geothermal, will also be a part of the solution. Every day there is word of new developments in carbon-storage techniques, and renewable and sustainable technology. The government must be deeply informed of all the technological possibilities, make sure that Canada’s citizens, especially young people, are a part of their development, invest money in them, and make laws to ensure they happen quickly.

It will be easier to stop climate change if we slow and reverse population growth. We have the means to support a few billion more people. But it will be so difficult, especially considering that this growth will occur in the Third World. The fewer people, the easier it is to act quickly, cooperate, and share. We must invest in women in other parts of the world so that they are in charge of their bodies and can plan their families, and we must educate women and all children. Canada, however, will likely receive many climate refugees and immigrants. We must plan, creating infrastructure and jobs with opportunities for fairly paid manual labour so that we can welcome them with open arms. On that note, considering the number of people, also consider dogs and cats, about 14 million in Canada, all of which require meat to feed. A carbon tax on non-working cats and dogs, would help to reduce their number, and persuade people to think twice about the environmental impact of a pet.

There can be no waiting for the right plan or the right technology to fix things. We have had decades to find a magic bullet and have not found it; we have to proceed without one. Although technology will help us to end climate change, we cannot engineer it away. I once read that there is no good time to have a baby. There is no good time to rebirth our world. Of course it is inconvenient that the biosphere has fallen ill; there is never a good time to be sick. But we still have to heal what we have damaged. I find it incredible that we can send a man to the moon, but we have failed to act proactively when it comes to climate change. We, the young generation, on behalf of all the other unique species on earth, expect the government to make drastic changes now, because the biosphere is incredibly fragile. We hold the government, and every single adult in Canada and across the world, accountable for all the actions you do and do not take. We must make another giant leap for mankind today, because otherwise all of mankind and every other living thing will suffer immensely. I challenge you, and expect you, to go and partake in this change, because to do nothing would be a betrayal of my generation.