It has been a year since our initial mobilization around the idea of a Civic Hub. A number of us continued meeting throughout the 2018 and worked on grants, connections and the first vision statement: A home, a landmark, accessible to everyone interested in civic and grassroots groups to showcase what is being done in the community, to allow groups to support each other, recruit, communicate and build credibility and capacity for advocacy and delivery of services to the community.

The number of small groups and organizations interested in the initiative is growing. A number of projects bringing together ethnocultural groups in Waterloo Region in 2018 testified that common, affordable space is a foundation for communication, collaboration and growth for many groups who feel isolated, under-resourced and in constant competition for supports.

However, there is little understanding of the core work that civic groups and small non-profits do in Waterloo Region.

We can learn together with other non-profit networks who want to create hubs for their sectors, such as WR Environmental Network and WR Arts Council.

Our strength is in our diversity and our common vision.

On January 21st 2019, we will gather again to share updates and brainstorm ideas about the next steps in creation of a Civic Hub.

RSVP by January 15th. Please get in touch if you need more information or have ideas/comments to share before the 21st.

Your Voice and Your Donation Count!
Give for A Better Common Future Perpectives On Peace: Where’s the Peace and Justice? was held on Saturday, 27 October 2018 at Kitchener City Hall. The video is ©2018 by Laurel L. Russwurm and released under a Creative Commons Attribution Only (CC BY) license.

On Saturday, 27 October 2018 KW Peace held the second Perspectives on Peace symposium. Lunch was provided at no cost thanks to the generosity and work of Kitchener Food Not Bombs.

People at Perspectives On Peace 2018, eating lunch provided by Food Not Bombs 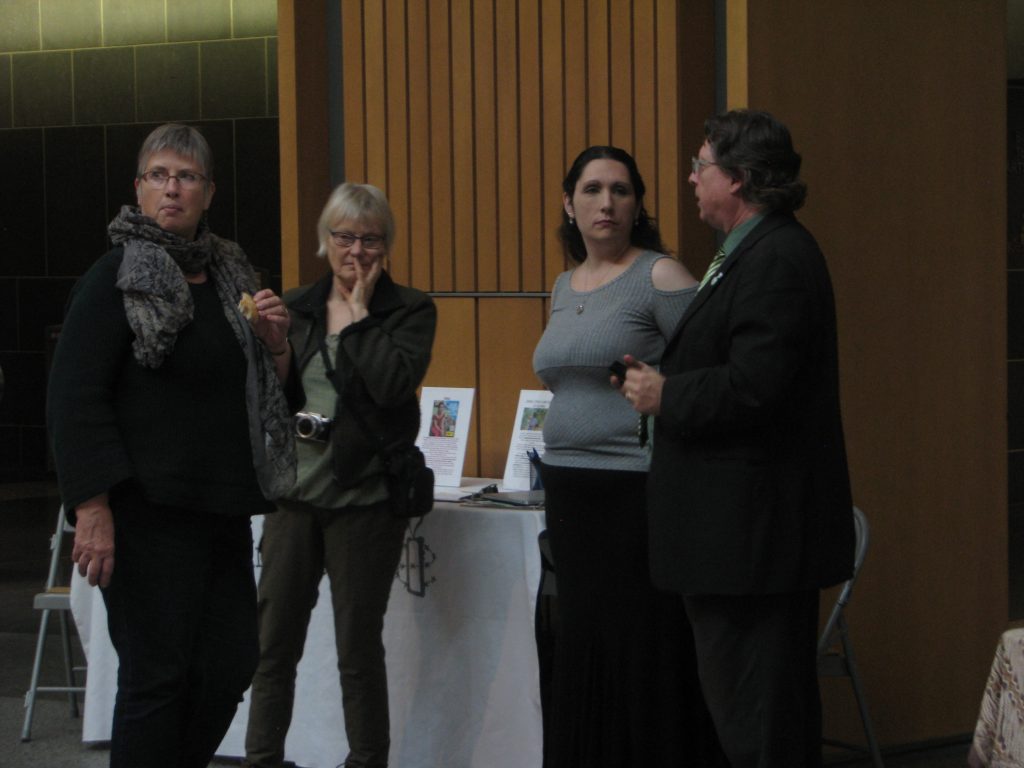 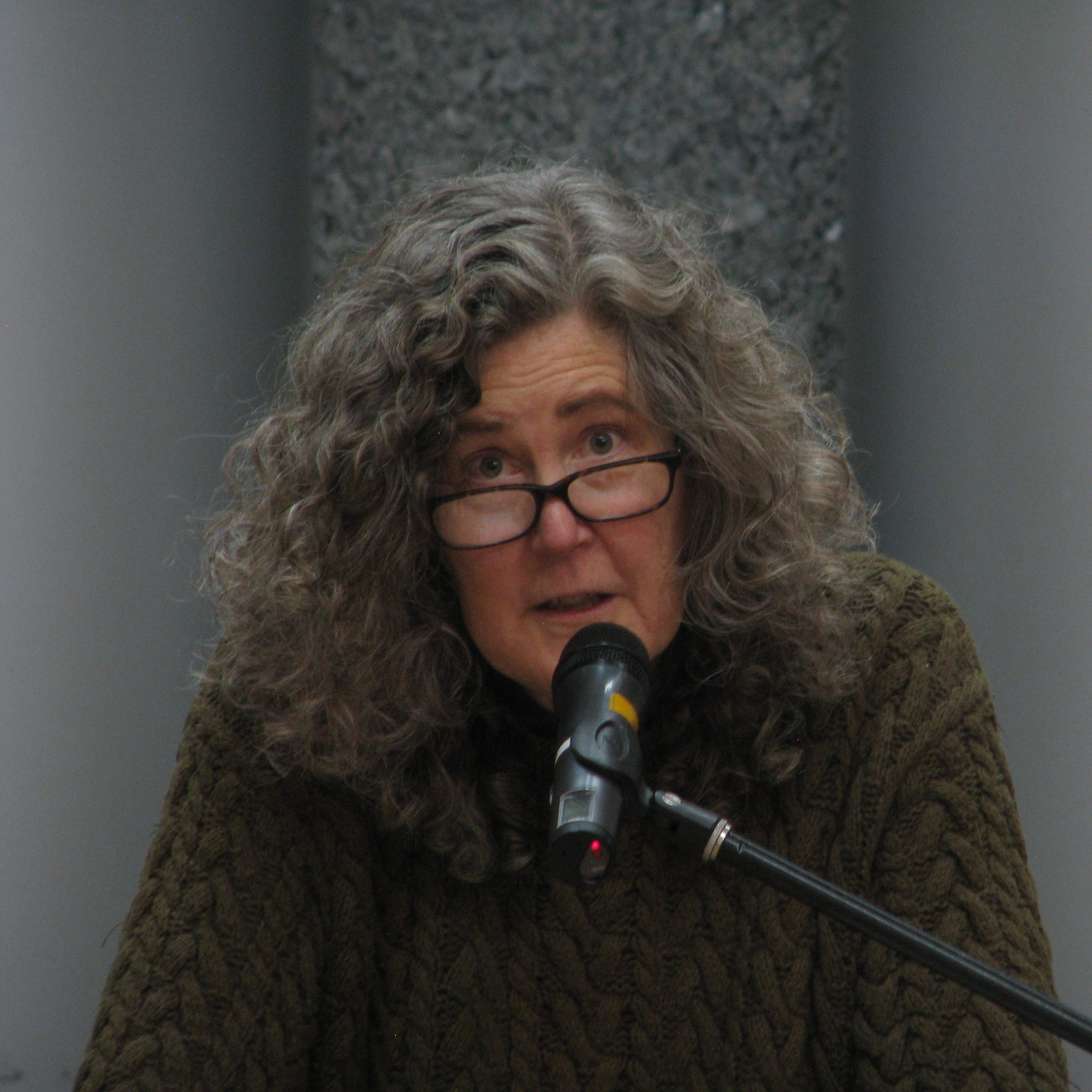 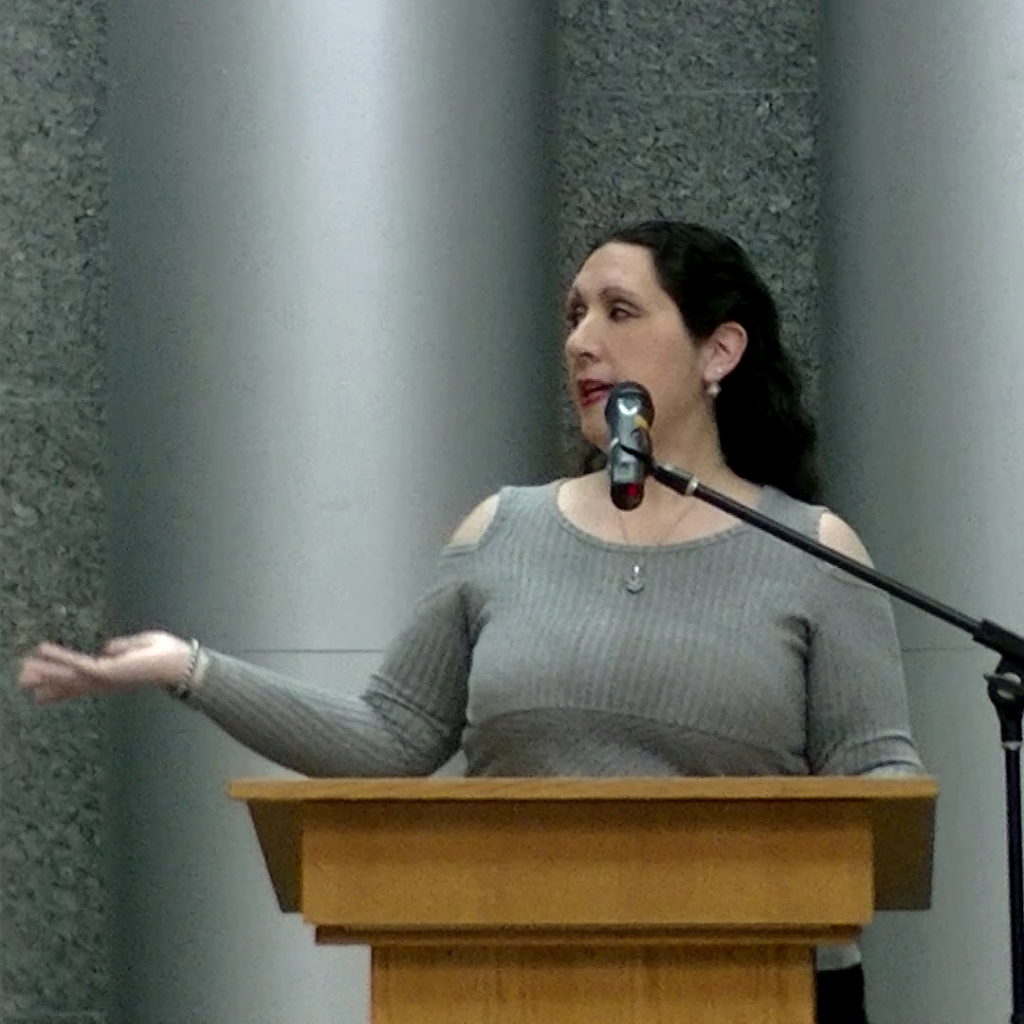 Tamara Lorincz gives a presentation on The Climate and Environmental Impacts of the Canadian Military. Download the slides (PDF, 6.2 MBytes)

Participants at Perspectives On Peace 2018 gather for a group photo 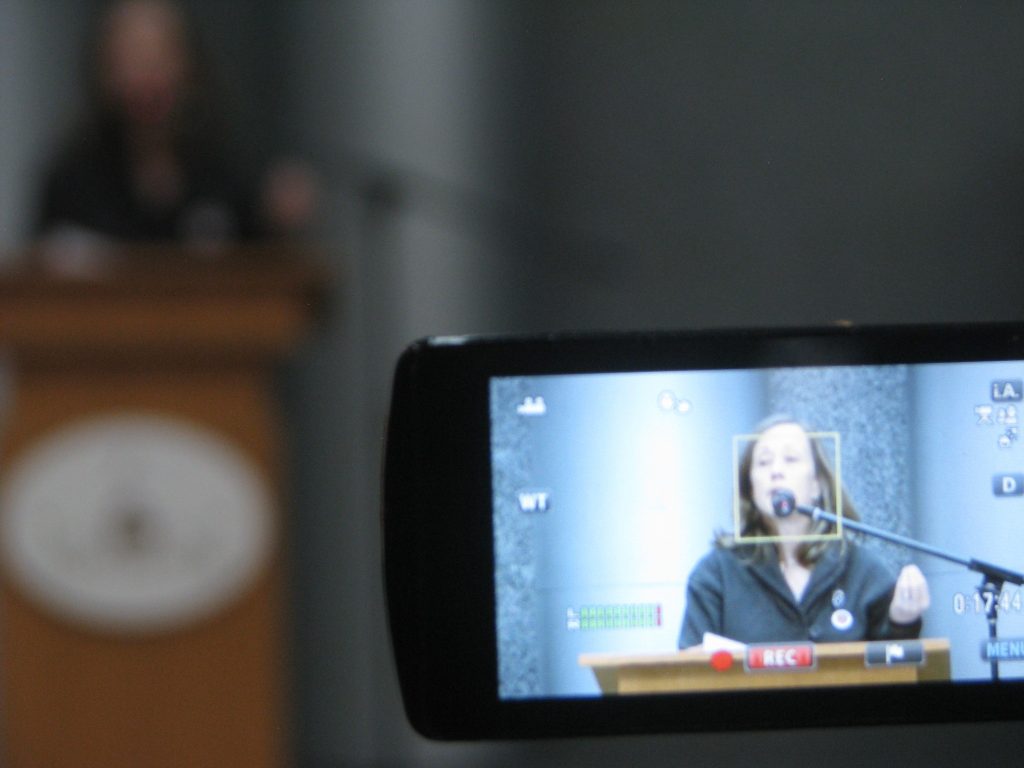 Video of Perspectives On Peace 2018 will be available soon

Photos copyright © 2018 by Laurel L. Russwurm, used under a

Slides of The Climate and Environmental Impacts of the Canadian Military copyright © 2018 by Tamara Lorincz used by permission. Are you an organizer for a Waterloo Region group that advocates for Peace, Nonviolence, or one of the many faces of Social Justice? Please join us at the Fall 2018 KWPeace Potluck Meeting.

The primary item on the agenda is this year’s Perspectives On Peace. This year we’re planning to serve lunch courtesy of Kitchener Food Not Bombs and we have special guest speaker Tamara Lorincz to talk about Canada’s new defence and foreign policies and the environmental and social impacts such as climate, military spending, &c.

If you have any particular items you’d like to discuss please let Mo Markham know at mo.markham@kwpeace.ca

The meeting is also a potluck dinner, so bring something to share if you can. Past contributions have included salads, entrées, snacks, and desserts. Some will be vegetarian and vegan dishes.

See you at the potluck meeting! 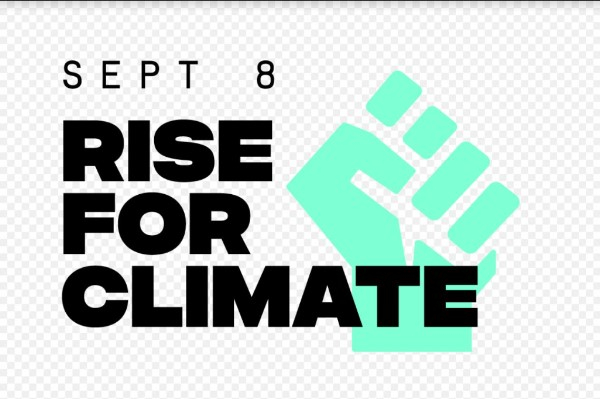 This Saturday, as part of the international Rise for Climate movement, thousands of rallies and other events will be held in cities and towns around the world. Our local rally will be held in Waterloo Square, this Saturday, 8 September 2018 at 4:30pm. Join us for art creation and some pre-rally street theatre starting at 3:00pm.

There’s an important new message in these events — “a fast and fair transition to 100% renewable energy for all”, holding together themes of climate, jobs and justice.

Progress toward a more stable climate requires justice for all people – those impacted by the damages of climate chaos, and those who’s communities and jobs will have to change in the shift from fossil fuels.

The Rise for Climate rally is an excellent opportunity to learn more about strategies for a “just transition,” to connect with an increasingly diverse coalition of climate activists, and to voice your call for our region, province and country to move quickly in addressing the climate crisis.

Thank you for your ongoing support for Divest Waterloo and for your part in our collective action to raise awareness and engage our community on issues related to climate change, our pursuit of a low carbon economy, and our movement towards a just and sustainable future.

Join us for the RISE for CLIMATE rally at Waterloo Square this Saturday, September 8th, 4:30pm | Mailchimp

KWPeace held its Potluck Meeting for Summer 2018 on Thursday, 19 July 2018 in the Peace and Justice room at Stirling Avenue Mennonite Church. Scott Miller Cressman was there to take pictures.

All pictures by Scott Miller Cressman.

A much needed minimum wage boost has come to Ontario. The nonprofit sector requires similar consideration to make the transition to higher labour costs as small businesses do. One step is to adjust Transfer Payment Agreements (TPAs) to accommodate higher labour costs in the next fiscal period as discussion begins on the 2018-19 Ontario Budget, as requested by the Ontario Non-profit Network’s pre-budget submission (PDF, 333 kBytes), supported by the Social Planning Network of Ontario. Many smaller non-profits without TPAs also require consideration for increased funding support to adjust to new employment standards and fair wage practices take effect.

PHARMACARE FOR ALL — WHY NOT?

An event sponsored by Council of Canadians (Halton Chapter) — Monday, March 5 at the Art Gallery of Burlington, 7 PM to 9 PM.

This event intends to inform the public about the health, social and economic impacts of universal Pharmacare, and intends to help keep this issue at the forefront of the political agenda for Ontario and Canada as a whole

Maude Barlow is the Honorary Chairperson of the Council of Canadians and chairs the board of Washington-based Food and Water Watch. She serves on the executive of the Global Alliance for the Rights of Nature and is a Councillor with the Hamburg-based World Future Council. Maude is the recipient of fourteen honorary doctorates as well as many prestigious awards for her environmental activism. In 2008/2009, she served as Senior Advisor on Water to the President of the UN General Assembly and was a leader in the campaign to have water recognized as a human right by the UN. She is the author of dozens of reports, as well as 18 books, including her latest, Blue Future: Protecting Water For People And The Planet Forever and Boiling Point: Government Neglect, Corporate Abuse, and Canada’s Water Crisis.

Brian Hutchison is a Professor Emeritus in the Department of Family Medicine at McMaster University and past Director of the Centre for Health Economics and Policy Analysis at McMaster University. He practiced comprehensive family medicine for five years in a fee-for-service group practice, followed by 25 years in a McMaster University academic family practice. Among other senior roles, he was the Co-Chair of the Canadian Working Group for Primary Healthcare Improvement from 2008 to 2014 and is currently a vice-chair of Canadian Doctors for Medicare. In 2015 he was named as one of 20 Top Pioneers of Family Medicine Research in Canada by the College of Family Physicians of Canada.

Following their presentations, there will be a panel including a local pharmacist, a retired benefits specialist and a health professional. The audience is welcome to participate in the discussion.

Canada is the only developed country with a universal Medicare program without a universal Pharmacare plan. This event intends to inform the public about the health social and economic impacts of universal Pharmacare and keep this issue at the forefront of the political agenda for Ontario and Canada as a whole. Ontario has already improved Pharmacare coverage to Age 25 but it is time to complete the process.

Let us know you’re coming on our Facebook Event page.

From our friends at the Social Planning Council of Cambridge and North Dumfries:

The Region of Waterloo is looking for volunteers to participate in a research study.

The purpose of the study is to evaluate the effects of different reduced fare transit passes. People who are selected for the study could get:

Please help spread the word and advertise in your offices / through your communications.

Community members can sign up to attend study information and registration sessions through Eventbrite links that can be found on the GRT website.

Please see the GRT webpage for more information/details of the study:

We need to “treat each other as human beings instead of labelling and stereotyping,” organizer says 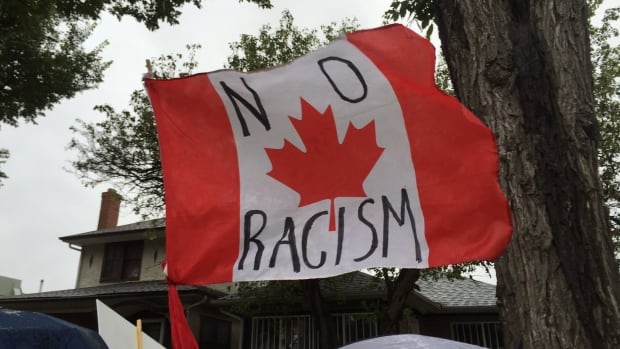 This flag was used at a Walk Against Racism in Regina in February. A day-long event at Kitchener City Hall Tuesday is dedicated to the United Nation’s International Day for the Elimination of Racial Discrimination. (CBC)

(Note: CBC does not endorse and is not responsible for the content of external links.)

An all-day event at Kitchener City Hall Tuesday is meant to open the discussion on racism in Waterloo region.

The event marks the United Nations’ International Day for the Elimination of Racial Discrimination and is organized by the editor of the local website Cross Cultures, Gehan Sabry.

In the past year, there has been a lot of talk about racism in the region and Sabry hopes this event — now in its 16th year — will help kickstart more dialogue about the issue.

“There is racism,” Sabry said.

“Sometimes it’s more obvious and to the surface,” she added. “We’re hoping that people, through understanding each other, that there will be less of the unknown and treat each other as human beings instead of labelling and stereotyping and being leery of other people because they just don’t understand them.”

Everyone has talents, passions

The day will include several speakers, presentations, booths, music and discussions. The morning and early afternoon is largely for high school students, but the public is encouraged to take part in events starting at 2 p.m.

One of those talks will be by the organization Bridges to Belonging. Executive director Cameron Dearlove said that group is known for helping people with developmental disabilities or mental health issues, but he says they help anyone who struggles to build a full life in the community.

He said their message will be about how we need to see each other as people first.

“Everybody, whether you have a disability or not, has gifts, has talents, has passions,” he said. “If people aren’t sharing those, that’s our job to help people uncover those and find the places where they can share those and build their life within the community.”

This year’s theme is Our Home On Native Land, and Sabry said it’s important because we need to remember “we are all guests of the Indigenous people of this Turtle Island.”

Sabry, who is Muslim, said she hopes people will come, listen and then go back to their communities and talk about the issues.

“I’m hoping people will be encouraged to share this information with others: Their family, their friends, their colleagues. And that we can promote better feelings amongst us, more peace, more respect, mutual respect,” she said.